The morning after the famous Scorpion fancy dress party is always a delicate affair. This years theme of ‘Pop Stars Dead or Alive’ did not fail to deliver on costume creativity and daring dance moves.

With more ABBA members present than you can shake a glittery wig at, a flawless performance of Gangham style from Psy and air guitaring from several rock gods it was certainly a night to remember. Winning the Peaches of Pennine this year is Amy Winehouse aka ‘Polly Newman’ tattoos and all!

Winning the pecker was a certain Miss Rachel Rhodes who was nominated for failing to operate a GoPro to capture Tom Jeffcoate & Tim Hartleys attempt at a Scorpion speed record. With racing called off on Wednesday due to too much wind, they took 2037 out in the 37 knots of breeze in Weymouth harbour and hit a top speed of just over 18 knots. With Rich Pepperdine piloting a rib through the massive waves to capture the moment on camera, unfortunately Rachel failed to capture any moments on the go pro. They managed to get one picture, which was a rib selfie of Rich & Rach. Thankfully we have Strava evidence instead.

The final day of the 57th Scorpion Nationals dawned with breezy and bright conditions for an early start as three races was the call from our race officer Bill Barker. The points were tight with the top six boats all having the opportunity to take a chance on winning the overall series.

You know the rules, you know the game… Snakes and Ladders… it’s about to change… Weymouth bay soon had Scorpion Sailors everywhere, with a sense of expectation hanging in the air.

Race 7 began under the second time of asking, Tom & Tim (2037) flew off the committee boat end, taking shifts up the middle of the beat to hear the bell ring around the windward mark, popping the kite they managed to lead from start to finish. McKee & Graham managed to sneak past Turner & Hayman on the second reach of the triangle to secure second place. Krailing & Forbes (2034) came under scrutiny from the man in the middle who issued a yellow flag for pumping, which meant that Turner & Hayman (2043) secured a third. Mursell & Barker (2020) were having a super trouper race but unfortunately were OCS, meaning they took the first snake of the day away from the overall win.

McKee & Graham led race 8 from start to finish climbing the ladder to secure the overall championship win. Leaving the 4 boats below to fight it out for the remaining places. Turner & Hayman (2043) pushed through the crowd to take 2nd place. Gray & Pepperdine (2039) finished in 3rd place, however there was no finishing hoot for him as he was S.O.S… sorry OCS. Though this was a discard they still counted a previous 6th. So with this they slipped down the next snake into a respectable 4th place overall.

Race 9 saw McKee & Graham taking a backseat, staying behind the top five who were evenly matched for speed.

Tim and Tom changed their starting tactics, finding themselves first in line by the committee boat end. Again playing the shifts up the middle beat to round the windward mark to lead from start to finish. But it was a damage limitation race win as 2037 finish overall in third place.

Krailing & Forbes (2034) found form and took their best result of the championships with a second. When this new pairing entered the nationals there were no promises from Simon and it finished with no regrets from Alan who finishes his first Scorpion champs in an excellent fifth place.

So now we know the start and we know the end, with McKee & Stevie Graham (2042) taking it all. With the 2016 winners Chris Turner & Alex Hayman (2043) gracefully handing over their Scorpion king crowns and settling for 2nd. Tom Jeffcoate & Tim Hartley climbing their ladder from fifth to third. While Pete Gray & Rich Pepperdine slid to fourth bumping Alan Krailing & Simon Forbes to fifth. While John Mursell & Sam Barker rounded up in 6th.

With 9 lady helms sailing this year, it was Janet Ritchie (2005 Drama Queen) who danced her way to the top, with the only hiccups being a capsize and a pole string slipping up the mast on the first day. This left poor Alan Ritchie looking less than impressed goose winging down the run.

The maiden plate (first lady crew) was won this year by Sarah Parsons (2041 Hot Fuss) who meant business by scoring a third on race 4. Only four points behind was sister in law Catherine Maguire (2024 Big Bag Wolf). 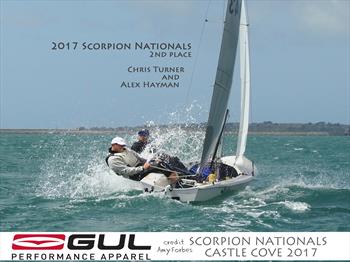 The Silver Fleet was hotly contested this year, with new pairing Rich Jones & Paul Newman (1947 Panama Jack) taking 5 fleet wins out of the 8 races. Panama Jack was often spotted in amongst the top ten and rounding the windward mark with the top 5. Even with a few battle bumps he carried on and was the well deserved winner of the Silver fleet. Rachael Rhodes & Hannah Edge (2023 Pincer Movement) held off Jock Fellows & Cara Jones (2004 Discreet Banana) by three points to take second place. They managed to catch the judges eye for all the right reasons by reaching runs to cut out places on the downwind legs. Much to Staunton Harold Sailing Clubs delight the girls also contributed to the ‘Top Gun’ award, which is for the highest placed 3 boats from one club.

The Bronze Fleet saw Malcolm James & Micheal Ripley (2001 Zephyr) on top with 3 fleet wins and by just 4 points over local Castle Cove sailors Alison Stephens & Chris Forrest (1892 Just Crackers) who won 2 fleet races and the first old boat trophy. Malcolm received a North Sail voucher for his win, many thanks to North Sails for their continued support of the class. Sandra Smith & Elizabeth Bowers (1852 Popsy) from Castle Cove take 3rd also with 2 fleet wins. Sandra Smith also received the Brian Curran award for outstanding services to the Scorpion class. Needless to say her organisation of games night and a treasure hunt were very much appreciated by the fun loving scorpion fleet.

The tenacity award goes deservedly to sister pairing Elysia Dooley & Isabelle Dooley (1834 Applejack) who completed every race, refusing to be blown away by the big breezes Weymouth offered this week.

Many thanks to the excellent hosting skills of the Castle Cove sailing club team. The canteen, the bar, the race team and support crews have been friendly and always helpful, even the bar staff were giving help on answers for the famous Nigel Denchfield quiz night. Many thanks to Linda Wolfenden, Lady Helen, Amy Forbes and the other Scorpion committee members who organise the nationals, prize giving and off water entertainment.

Great thanks to our main event sponsors GUL who have been very generous with their prizes, www.gul.com.

Also thanks to North Sails for providing spot prizes and donating a olympic sailing signed print, which was auctioned off by the class, altogether we raised £270 for the Scorpion association. Thanks also goes to Allen for providing visors and t shirts for spot prizes.

The next Scorpion event is at Lymington 2-3rd September. A joint open with the Merlin Rockets.

Pete and Rich win at Lymington

Pete and Rich win at Lymington

Scorpions get high at Pennine